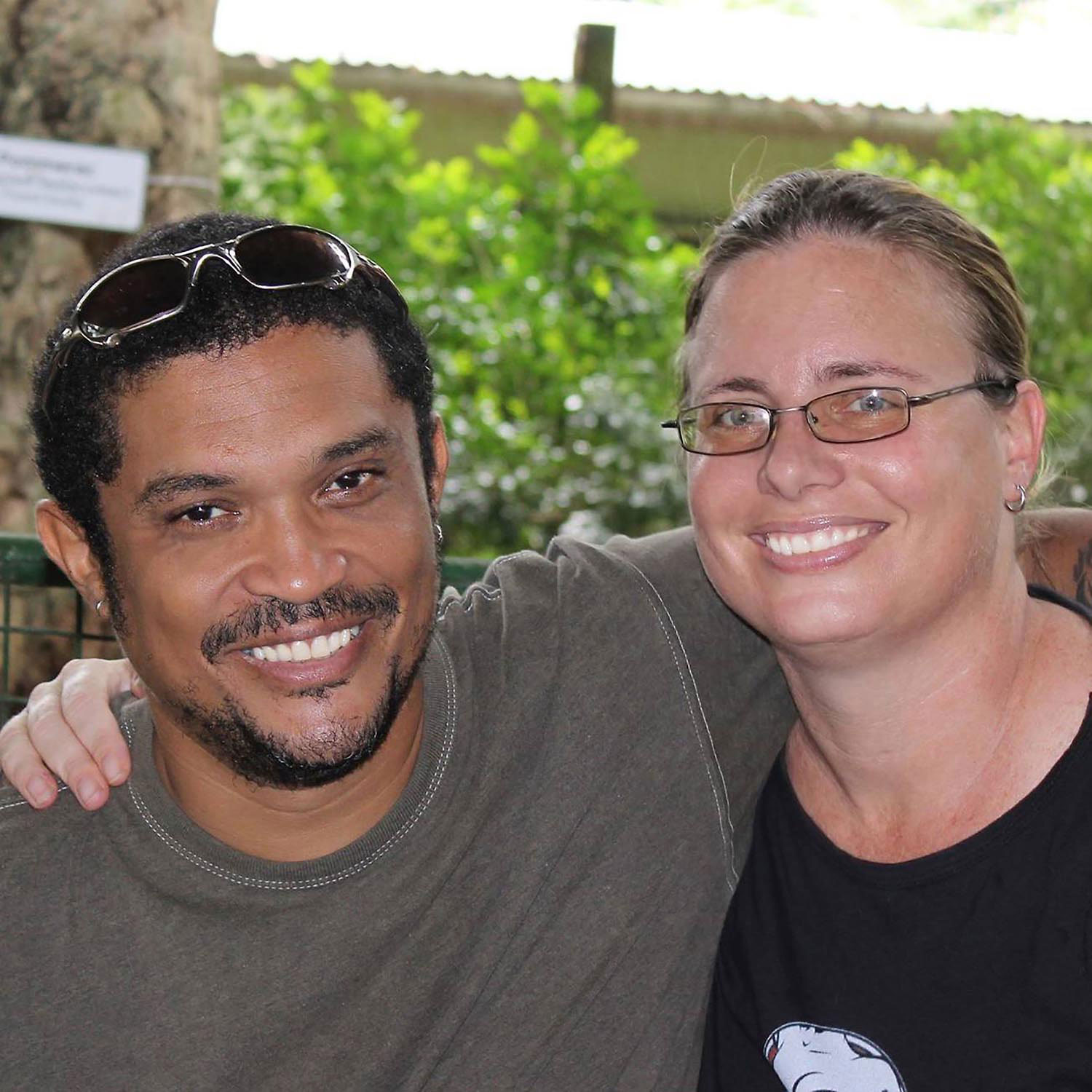 A love match introduced South African Bridget van Dongen Cadet to doubles, Trinidad’s beloved street food. And it was an affair to remember. Some 15 years later, she and her Trini husband opened their own doubles stall — in Antigua! Shelly-Ann Inniss learns more

It’s a familiar refrain at doubles stands around Trinidad and Tobago: “Pepper?” the vendor will ask. “Slight”, “medium”, “plenty”, or “none”, patrons reply. This call and response is now also becoming well-known in Antigua — at least, among the growing clientele at Slight Pepper, co-founded by South African Bridget van Dongen and her Trinidadian husband Sheldon Cadet.

Located on Old Parham Road — one of the busiest streets into St John’s — warm doubles (two warm pieces of fried, floury bara with curried chickpeas) and aloo pies (filled with curried potato) are the star attractions.

Of course, there are differences between the Antiguan and Trini setups. For starters, you won’t find the traditional “box” that serves as storage and workspace for Trini vendors. Instead, the Slight Pepper team uses trays with warmers and serves the doubles in paper. They also don’t expertly wrap the doubles with the characteristic twist and wrist flip like Trini vendors. “Every time we’ve tried, we’ve ended up with channa all over the walls!” jokes Bridget. Apple J is the drink of choice to wash down doubles in Trinidad; in Antigua, it’s pineapple or ginger juice.

Bridget — a former member of the Caribbean Beat team — recalls her doubles initiation outside Long Circular Mall on a visit to Trinidad for a wedding in 2005. “I found them messy but delicious,” she says. On her return to Antigua that year, she failed miserably in attempts to make them. She wouldn’t have to go long without proper doubles, however.

In 2010, she and Sheldon — who had been living in Antigua, where they met — relocated to Trinidad. “We’d have doubles twice weekly, if not more, when we lived there,” she says. She loved the ones on the corner of Agra Street in St James, especially for their roast pepper — pre-orders were necessary! Although these were her favourite, she says doubles sold from the back of a truck on the road to Mayaro were the best she’d had.

When the Cadets moved back to Antigua a year before the pandemic, Bridget was once again forced to make her own doubles when the cravings took hold. With Sheldon’s restaurant management experience, the couple had long dreamt of opening their own restaurant. Covid’s economic pressures presented the perfect opportunity to begin.

The couple had long admired the setup of doubles vendors in Trinidad and how hard they worked, making the process look deceptively simple. But, as many Trinis also learned when they took to making doubles at home during the tightest pandemic restrictions, it can be a much messier and more complicated process. Slight Pepper learned pretty early to cook the bara outside their home after a grease fire (luckily an extinguisher was handy). “There are some great recipes on YouTube,” Bridget advises. “The bara can be a little tricky, but make sure your oil is very hot.”

Lights go on in the Cadet household from 5:30am, and the workflow begins with preparing the channa and the potatoes for the aloo pies; followed by the dough at 6:00am (a couple of ladies help with the bara); and the Cadets setting up the shack to officially open at 7:45am. By midday everything is sold out. Sheldon does the sales while Bridget works behind the scenes — her pepper sauce is touted as one of the best.

Many Antiguans have never heard of doubles, so Slight Pepper’s biggest market is people who’ve visited Trinidad and tried the addictive street food, and of course Trinis living in Antigua. “The number of Trinis we have that are glad to finally have genuine doubles in Antigua is amazing,” she gushes. Word of mouth is working, and newbies are becoming regulars.