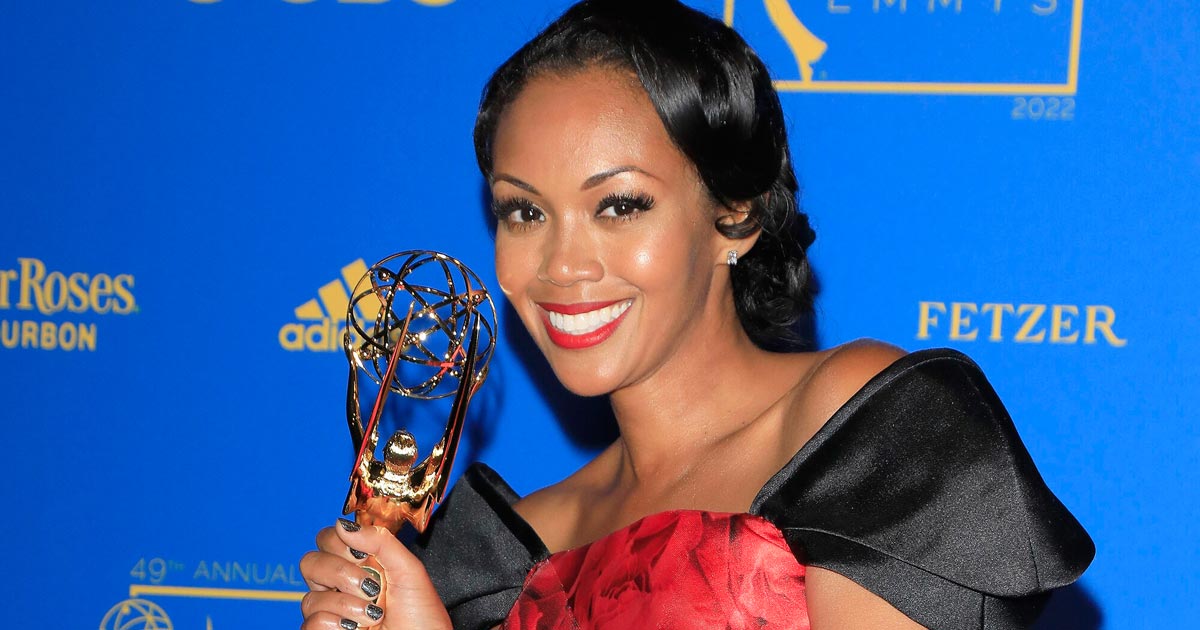 I have so much pride in the countries that contributed to my life. In Trinidad and Canada, the diversity and multiculturalism feel so seamless. We can’t say that racism doesn’t exist, but I see a real dedication to trying to overcome our differences, embrace each other, celebrate each other’s cultures and create our own new culture, in a way. I think that’s truly connected to my soul, and possibly my soul purpose.

I moved to Canada at five. Until I was 13 or 14, my parents only cooked Trinidadian food — roti, curry, stewed chicken and rice and peas. My mum also used to make provision, dumplings, caraille — oh my gosh, my mum with the caraille (bitter melon). I was the only one who could eat it. My parents always played calypso and soca music in the house, and we would go to Caribana in Toronto. My dad always pushed us to really understand other people’s cultures. But I think no matter what, you can’t get away from your roots.

Everybody in the Caribbean is so proud: flags on our windshields, on our Instagram accounts — everywhere. My husband is half Guyanese, half Pakistani, but pretty much grew up fully Guyanese. We’ve been together 19 years. My son already knows that he’s Trinidadian and doesn’t talk about being Guyanese yet, but he knows. We brainwash them from a very young age.

Trinidad has a way, especially in the food, of just connecting cultures. And I feel like that’s part of my purpose and who I am. Because standing on that Emmys stage and having that opportunity to give that acceptance speech, I feel I was designed for that moment because of where I came from.

My dad would not stop talking about the most beautiful woman that came from Trinidad — Janelle “Penny” Commissiong, the first Black woman to win Miss Universe. And 45 years later, I broke a glass ceiling myself. I think that that’s what’s beautiful — celebrating all of the glass ceilings that women of all different ethnicities are breaking in different industries.

That’s the one thing I didn’t get to say but wanted to say in my acceptance speech. I am lucky to be from Trinidad because I am filled with all these different cultures. My grandmother was half Chinese, half Venezuelan. My grandfather was French Creole. My dad’s side was Indian and Black. I have all of these cultures in my blood. I celebrate being the first Black woman to win — and I am also a multi-racial woman. It means a Chinese girl and an Indian girl can come after me. I wanted my speech to be about unity — reminding everybody that we are all connected and making these changes together.

My mum is one of 18 kids. My grandmother had 18 children all with the same husband.

When I went back to Trinidad for the first time when I was 14, I remember stepping off the plane and this overwhelming feeling of, I’m home. With my family, it was like we never left. We just picked up where we left off.

A lot of my family came down from all over the world for my grandmother’s 80th. I was 19. Granny “Shooney”. That’s when I broke my neck in a car accident down on Barrackpore Road.

My whole life had been dedicated to becoming an attorney. I felt I needed to maintain this perfect academic record so that I could get into York University for Political Science and then law school. In Canada, you can apply for law school after your second year of undergrad. School was always pretty easy for me. I was always a really dedicated student. I was pretty active in my faith. But it always felt like something was pushing against me. So I had this kind of breakup with God for two or three years. And the accident was like me coming back home.

I was just lying there for five days while they tried to figure out the surgery. I remember being content with everything that I did in my life. I was thinking even if I got paralysed from the neck down, I could push against it — maybe even be a lawyer. Then I remembered hearing a voice:  “But you never tried.”

I knew what they were talking about because things just didn’t feel aligned. I always loved acting. Every time there was a school play, I was in it. I’d have tiny parts and people always made me feel they’d noticed me when I was on stage. A teacher asked me if I was going to apply to an arts high school. My drama and English teacher was mad that I wasn’t at least going to double major in drama at university. When we did the yearbook, they said I was “most likely to be a movie star”. But my instinct was to wonder if they were bullying me. That’s all the stuff that came to my head. And I said to God, if you give me this opportunity to walk again, I guess I’ll try.

When I came back to Canada, I kind of got scammed for a bit. So I said another prayer for  somebody to guide and help me. I bartended my whole way through university, including at this nightclub where a man randomly came up to me and said he’d left a big agency, was breaking off on his own, and thought I’d be great for commercials. I just remembered feeling that was pretty fast. He’s been my agent ever since.

I booked the first thing I ever auditioned for, which was a music video I ended up getting cut out of. I auditioned for commercials, but told my agent I really wanted to act in film and television. He said I didn’t have any experience, but if I could audition for him, he could send me out on one or two things. I booked a guest star spot seven months later (The Best Years), and then 10 months into it, I booked a series regular role on Family Biz. My agent said it was unheard of.

All this time, I had deferred law school, but I was still doing year three at York. I got a call saying that I’d booked a second series regular role. But law school would be four hours away in Ottawa, so I wouldn’t be able to keep acting in Toronto. So I said a prayer saying I needed to hear — very clearly — that I was not going to law school. Two weeks before I was to go, my agent called and says, “You’re not going to law school.”

The reason I talk about purpose a lot is because after I took this huge leap of faith, both my shows got cancelled and I did not book another project for a year and a half. I’ve always had this weirdly optimistic outlook on life. I’ve never felt like a bitter or angry person or somebody who has a short fuse…except for that year and a half. I nearly went into a deep, dark depression. Something felt really off.

One day, I went into the bookstore and remember feeling so heavy. Not knowing I was in the self-help section, I started perusing and saw A New Earth by Eckhart Tolle. It literally had a line saying, if this is connecting to you, this book is for you. And I took it home and it completely transformed my life. I got rid of a lot of resentment for things not working out the way I wanted them to. And it put me in this place of alignment and flow.

But I’ve never been a showy person. I love acting for how it makes me feel and how free I am on stage since I was a kid. So it’s not about the money. I started thinking about why I wanted to be a lawyer. I wanted to change the world. I literally said that to myself, laughing. I wanted to fight for women’s rights and the rights of people. And it just hit me. I could spend 10 years lobbying for something, or I could put together a two-hour movie and change somebody’s heart, help them see and feel the world differently just through pictures and the artform of drama. That’s why I wanted to be an actor.

As soon as I discovered that, probably two weeks later, I started booking like crazy — including The Young & the Restless in 2013. Everything aligned. And that’s the reason I’m so big about knowing what you’re doing, because we have one life to live and we all have a piece of this puzzle to play. So you either become a purpose-driven person and your piece is bigger and more enjoyable, or you become a different tool that God’s going to use in a different way.

You can read the full interview with Mishael — with more on her Y&R work and other projects — here at our sister publication, Discover Trinidad & Tobago