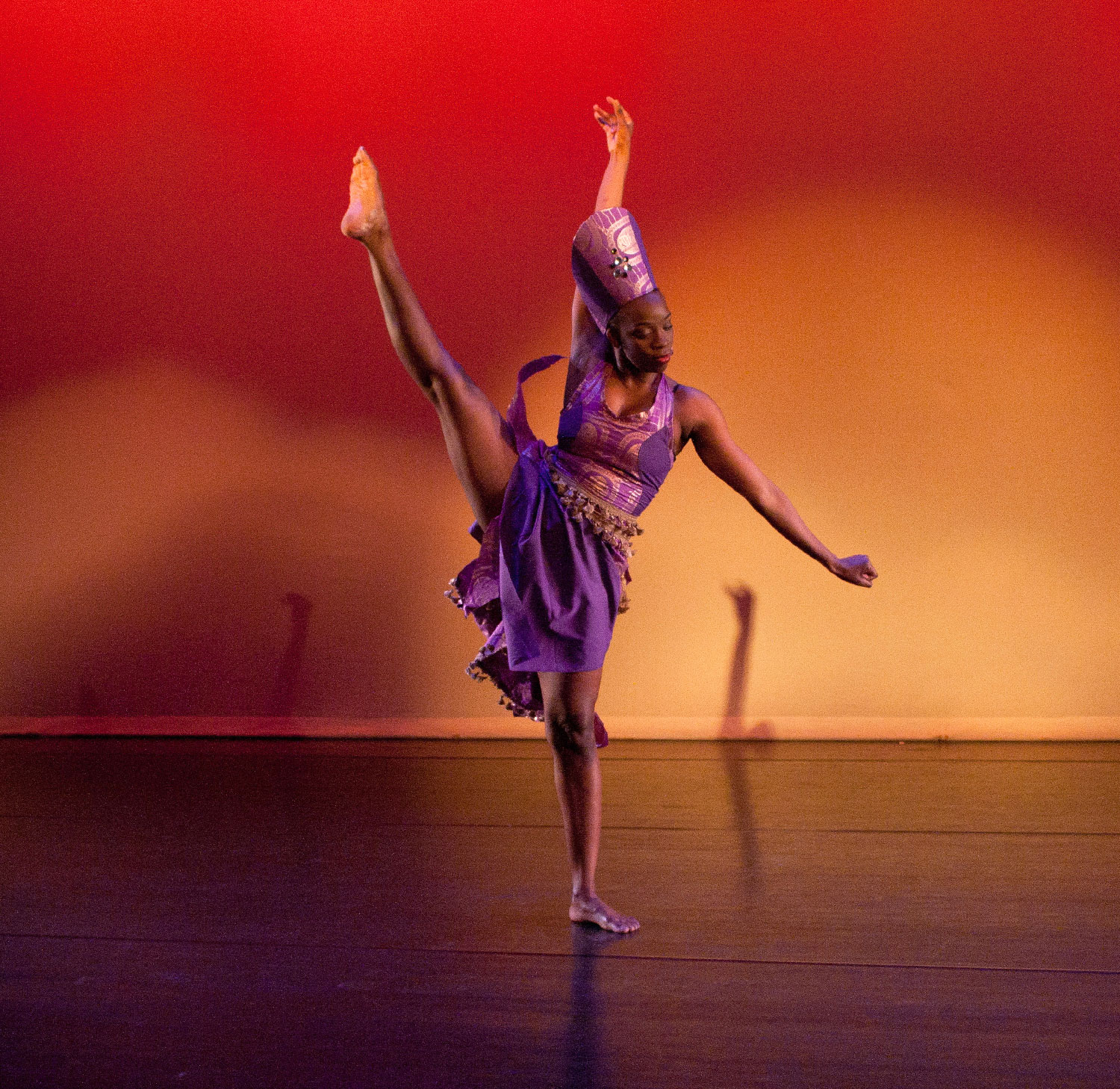 In classical ballet, there’s a position called attitude. The dancer stands on one leg with the other lifted — either in front or behind, slightly bent at the knee. It’s a pose dancer and educator Gina Mayers holds with incredible poise — one that belies the challenges of balancing a dynamic dance career and living with Multiple Sclerosis (MS).

“Dancing defines my spiritual being. It’s physical, it’s complicated, it brings great joy,” says Gina. “It allows me to be vulnerable in a way that is impossible in everyday life. I can be myself without fear of self-judgement.”

“When my father died, we were unable to afford dance classes, as we only had one income,” she remembers. It forced her mother Ingrid Mayers to make the excruciating decision for Gina and her sister to stop training.

It was a massive blow, as Gina was already struggling to work through her father’s passing. “While everyone cried during the grieving process, Gina was numb — unable to cry,” says Ingrid.

A year later, Gina — a “daddy’s girl” — still hadn’t shed a single tear. She refused to talk about her father’s passing. So Ingrid tried one more thing: she re-enrolled Gina at Dance Place under a scholarship provided by then principal Elizabeth Bayley.

Understandably, Gina struggled with technique during her first year back, leading them to defer her Royal Academy of Dance (RAD) exam. “When that happened, a fire in me ignited,” she says with bright eyes. “I got a copy of the recorded music for Grade 4, and every night I practised the entire class on the grass outside with my stereo. My barre was my patio ledge.”

It was a turning point for her. “As I was building my artistic performance and technique, I didn’t realise dance was changing me,” she says.

One evening when she got home after class, she finally began to cry. “Dance allowed me to tap into my deepest feelings of grief … it was a form of therapy that didn’t require talking.”

One year later, Gina entered the Grade 4 RAD exam, earning distinctions at that and each exam through Grade 8. She made a lasting impression on Bayley and the current Dance Place principal Adonia Evelyn, as well as on her fellow alumnae Simonne Cumberbatch and Dr Tamica Lawrence. They describe Gina as “fearless, determined, dream-seeking and deeply caring”.

It was no surprise Gina would pursue dance professionally. But no one anticipated her journey. In 2009, when she was finishing her BFA in Creative Arts: Dance & Film at the University of the West Indies, Cave Hill, she experienced blurred vision and memory loss. She was 23 at the time.

She was admitted to the hospital after a visit to an eye specialist and a neurologist. Her vision had deteriorated rapidly, leading to blindness in one eye. The diagnosis? Optic Neuritis. Steroids helped her regain most of her sight, but it never fully returned.

MRI scans showed lesions around her brain, and doctors told her she was high risk for MS. She experienced crippling nerve pain, severe memory loss, and consistent exhaustion — but wasn’t prescribed any medication.

“You’re always hurting with body pain. Your nerves are over-firing, so there is electric pain radiating down your arms,” says Gina. “Stiff neck, depression, lack of balance and hand-eye coordination are also symptoms.”

She saw two more neurologists, receiving inconclusive results each time. So she took a leap of faith — enrolling at The Ailey School at the Alvin Ailey American Dance Theatre in New York.

“I figured if this will continuously get worse, I might as well do what I truly want to do on a larger scale,” she says.

Over the years, Gina has been able to perform at numerous festivals and events, in music videos, film and television, and across a range of styles — jazz, ballet, West African, modern and contemporary.

She danced and choreographed a solo for the first annual Summer Bricolage in New York (2017), executive produced by renowned Broadway star and actor Taye Diggs. Ten years earlier, she’d performed at the Barbados Music Awards, sharing the stage with acts like Rihanna. She also represents Barbados as an official US-based Cultural Ambassador in Dance.

But it hasn’t always been an easy road. In 2014, she finally received an MS diagnosis — five years after her first symptoms. The trajectory of her promising dance career completely changed.

With her hand-eye coordination affected, turns, pirouettes, and even balancing on one leg sometimes became nearly impossible. At one point, she experienced numbness in both legs and had to ask her friend if her toes were pointing. Short term memory difficulties made retaining choreography a challenge; she now relies heavily on muscle memory.

“I missed performances and rehearsals because I was ill or blind, and was terminated because I was constantly sick,” she remembers.

Early treatments also caused a range of side effects, including depression, and steroid injections caused significant weight gain. “Dance being an aesthetic sport, [it] caused me to be unconsidered for roles because I no longer had the ideal body type,” she says.

But she’s now on a new course of medication and much happier with the results.

“With dance, [there’s also] a way in which my aesthetic — being a dark-skinned Black woman — would impact roles I had the technical and artistic ability to get,” she says. “Once I found where I fit in, I was embraced there,” she says.

In 2019, Gina was handpicked as a choreographer and teacher at the prestigious Dwana Smallwood Performing Arts Center, whose founder Dwana Smallwood was proclaimed “one of the greatest modern dancers” by Vogue. Gina was also a teaching assistant at The Ailey School and a dance specialist and choreographer with the South Asian Youth Action (SAYA) dance programme, among others.

“My favourite part is performing in large venues and the reactions from the audience — specifically children,” she says.

In 2017, Gina developed the movement component of the Shadow Box Theatre’s One Foot in One Foot Out curriculum workshop at Children of Promise — an organisation that nurtures the children of incarcerated parents. She also was commissioned to write and develop a dance syllabus based on the New York Times’ acclaimed The Earth and Me musical.

Gina’s positive attitude — choosing to live life passionately, and without regrets — touches the children she teaches, and is palpable in all her interactions. “Bite into life, take everything you can from it — the manna, the nectar. Live in the present!” she urges.

Every day, Gina takes inspiration from trailblazers like Aesha Ash, Lauren Anderson, Hope Boykin, Misty Copeland, and the Trinidad-born Pearl Primus — all of whom overcame tremendous adversity, breaking barriers for Black women in dance and contributing immeasurably to the artform.

Their achievements inspire Gina to keep trying — working every day to do what brings her joy, and to impact the lives of young dancers for the better. And always, with attitude.

MS is one of the most common causes of disability in adults in their 20s, 30s, and 40s. It is two to three times more common in women than men.