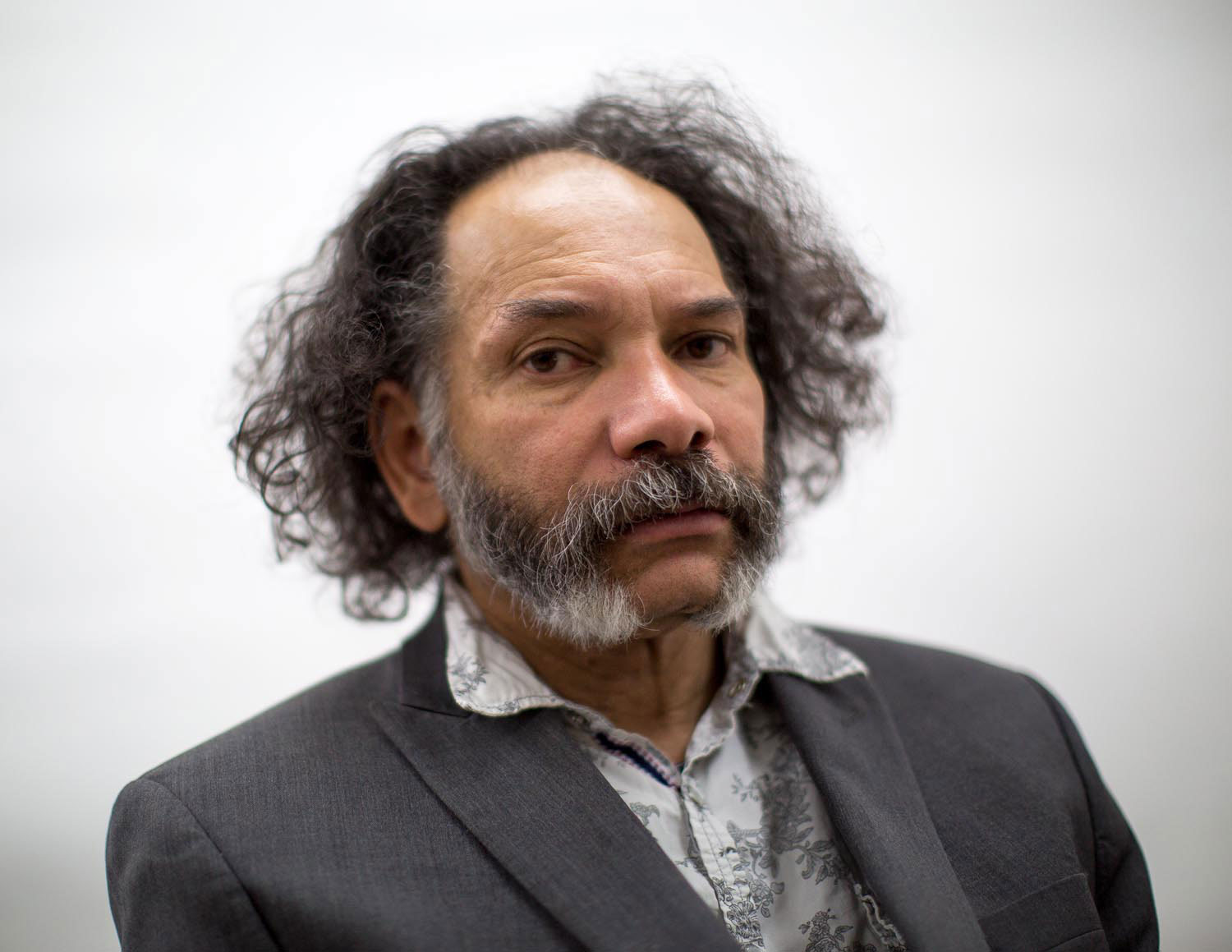 As you enter the room, you are confronted by them. At first glance, they seem life-sized, these four horsemen. But then you realise they are miniatures that have been placed on pedestals. Immediately, through this trick of scale and this gesture of placement, Hew Locke invites us to question the idea of what is “monumental”. Who gets to be immortalised? Which figures make it onto the plinth? Why?

But The Ambassadors (2021) is also a series of objects very much concerned with other subversions. Each is covered with materials, colours, and textures that both reinforce and undercut their connotations of power.

They are laden with strings of fake pearls, Mardi Gras beads, plastic flowers, mesh, doilies, two-dimensional sculptural forms, wooden boxes, and tattered regalia. Toy-like and monumental, earthly and mystical, they seem to gallop right out of the febrile imagination of Wilson Harris — a writer who, like Locke, voyaged between Guyana and Britain.

“They come from some empire, some imaginary state,” Locke says of his horsemen in a note in a room at London’s Hayward Gallery, where The Ambassadors was on display last summer.

The series, among the artist’s most recently shown pieces in the United Kingdom, was part of In the Black Fantastic, an Afrofuturist exhibition curated by Ekow Eshun, which also included British artist Chris Ofili and American artist Kara Walker.

Locke was born in Edinburgh, Scotland in 1959, the eldest son of Guyanese sculptor Donald Locke and British painter Leila Locke (née Chaplin). The family moved to Guyana by boat when he was five, triggering Locke’s enduring interest in the relics of voyaging, colonialism, and nationhood.

As a child living in the tropics — that inspired the yellow ochre tones in his mother’s paintings and the modernist forms of his father’s pieces — he witnessed Guyana’s independence in 1966.

“I saw the flag being designed,” Locke recently recalled. “We were allowed to stay up at night to watch the handover from the British to the Guyanese government. And that had quite an impact on me. It gave me a lifelong interest in how nations are formed and what they choose as their symbols of nationhood.”

After the rise of Forbes Burnham, the family moved back to Britain in 1980, during Margaret Thatcher’s reign. But Locke did not leave behind his roving spirit.

That spirit — which this year has garnered wider attention in the UK and internationally — is infused with the charge of Caribbean cultural influences, arguably including Trinidad’s theatrical Carnival, Guyana’s colourful Mashramani, and The Bahamas’ rhythmic Junkanoo.

In the same room of the Hayward Gallery this summer was a series of older, life-sized photographs by Locke called How Do You Want Me? The artist is featured in each image, but is — deliberately — barely visible: he is overladen with a profuse cornucopia of objects.

In “Saturn” (2007), he stands in front of a famous silhouette of the late Queen Elizabeth II. He holds a royal staff while being completely encumbered by silk flowers, dollies, plastic mangoes, toy crowns, ribbons, and beads.

Locke began the series wishing to mock the appetite of the metropolitan art world for the latest “exotic” thing. But the pageantry here also pokes fun at the history of portraiture more generally, particularly its association with the wealthy and the powerful.

While Locke is somewhat agnostic when it comes to the institution of the monarchy (“my political position is neither republican nor monarchist”, he once declared) he nevertheless brings a tongue-in-cheek sensibility to ideas of royalty — a sensibility that is straight out of Caribbean ole mas and picong.

“It’s all about messing around with all this cheap tat but trying to elevate it to something much higher,” Locke says. “I make work in which there is a lot of difficulty … maybe defiance, maybe conflict.”

In these images, which in a way refract and echo The Ambassadors, the ludicrousness of claims to power is laid bare, while that same power is re-apportioned elsewhere — and, in the process, rehabilitated.

Scale is crucial in Locke’s work. The Procession — a commission currently on display in London at the Tate Britain — feels at once epic and intimate. A parade of colourful costumed figures stretches before us through a grand gallery space. Some are life-sized, but some seem diminutive: possibly children or, as in The Ambassadors, miniatures.

Golden and flamboyant materials rub against each other in a collage of rough textures, flags, and strips of custom-made fabric — some of which has been hand painted by the artist. The Trinidadian figure of the Pierrot Grenade — a traditional Carnival character who spouts verse and wears colourful strips of cloth — looms large.

The effect creates a kind of productive claustrophobia. The artist has crowded the space but, in the process, invites us to have intimate engagements in a journey from one point to the next.

“I think of The Procession as an epic poem,” Locke says. “How this piece is perceived over time will change and evolve.”

That sense of evolution is key to Foreign Exchange, a temporary installation at Birmingham’s Victoria Square also staged earlier this year, coinciding with the city’s hosting of the Commonwealth Games.

In a previous show — Here’s the Thing, a 2019 retrospective held at Birmingham’s Ikon Gallery — Locke hung several miniature boats in space alongside busts of Queen Elizabeth II. But here, a statue of Queen Victoria is encased in a single boat sculpture. And that boat is filled with several replicas of the Victoria statue. The move suggests the multiple understandings of history that emerge with different perspectives.

“It’s about complexity, it’s about the messiness of history,” Locke says.

And yet the stasis of both works raises the idea of something trapped in a moment in time: a calm before the storm. Exuberance and optimism meet fear and stuntedness. Each piece in the procession of the artist’s increasingly ambitious output may well be a portrait of the yearning of the artist — of the artist himself.

“It’s about hope,” Locke says of what he is doing. “It is a positive movement of people. They are moving into another life.”

Hew Locke’s The Procession is on display at the Tate Britain in London until 22 January, 2023