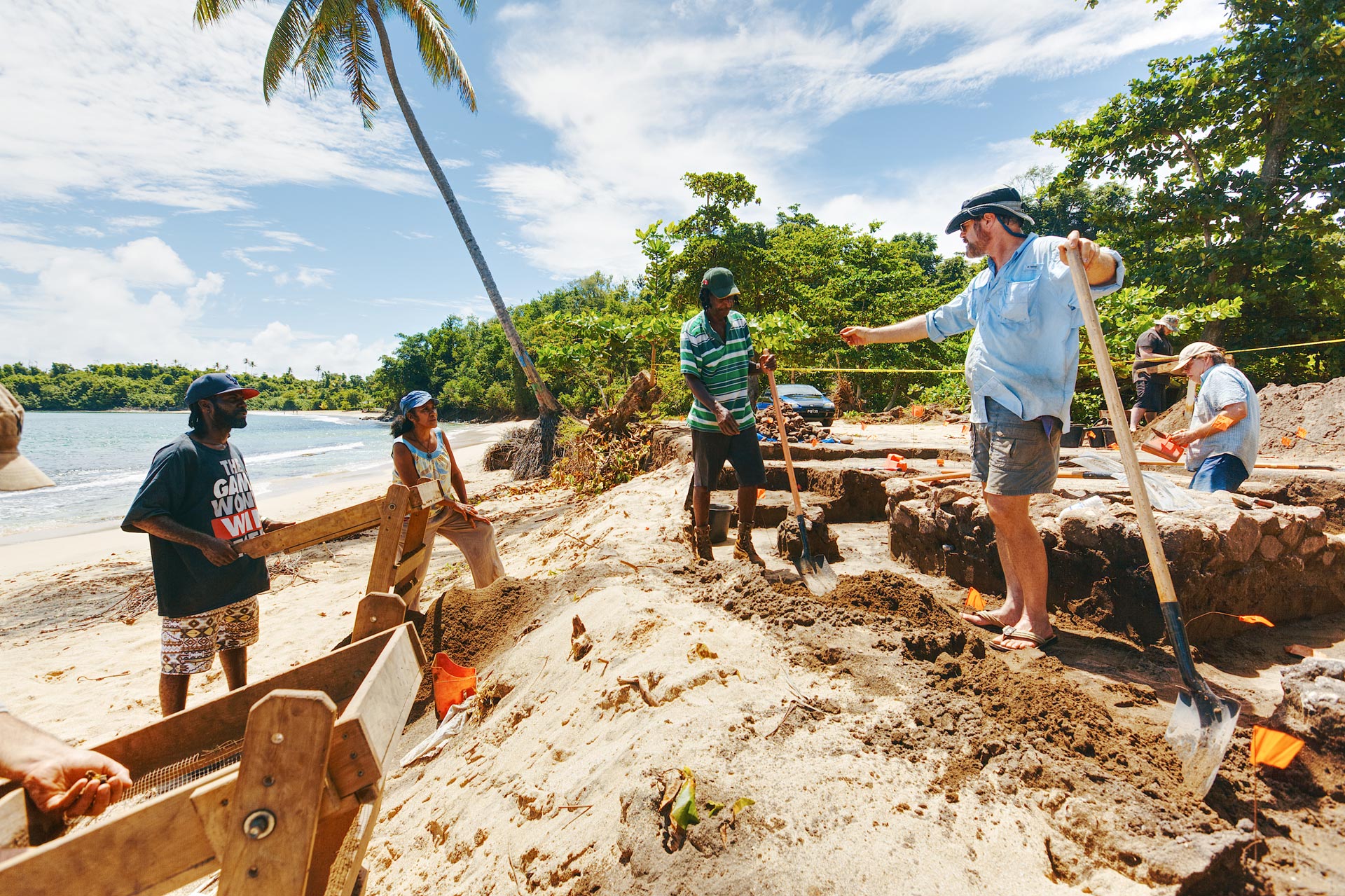 Several months after hurricane Maria ravaged Dominica in 2017, local historian Dr Lennox Honychurch was strolling along the beach near his home at Woodford Hill, in the northeast of the island, when he made a tantalising discovery.

Beach erosion, caused by high tidal surges, had exposed curious pottery fragments. Intriguingly, they appeared to be from different cultures and time periods. Some of the ceramics were Amerindian — possibly Cayo — and others European, possibly French or Dutch.

Honychurch contacted Mark Hauser, Associate Professor of Anthropology at Northwestern University; he had been visiting Dominica for around 10 years on various field seasons to study colonial estate sites at Bois Cotlette, Sugarloaf, and Morne Patates.

Keen to understand the effects of the hurricane on Dominica’s historical legacies, he was more than happy to investigate Honychurch’s discovery.

What Hauser learned on that first exploratory trip was enough for him to organise a small team of experts to return to Dominica to examine the location in more detail.

The area first appears on an anonymous map of 1760 as a settlement called La Soye, but no known historical records shed any light on who may have lived there, for how long, why it was so named (“la soye” is French for “silk”), or why it was eventually abandoned.

With its mountainous terrain, thick forest, and occupation by a formidable population of Kalinago, Dominica was the last island in the eastern Caribbean to be colonised by Europeans seeking their fortunes; they’d regarded it as too inaccessible and inhospitable.

The first recorded European settlement was in the early 1700s, when French lumbermen from Martinique arrived and set up camp on the south coast in an area now known as Grand Bay. Given the lack of information about the La Soye community, the only way to understand its story would be through archaeology.

The first test excavation holes at the La Soye site on Woodford Hill beach certainly caused a stir. Not really knowing what they might find, Hauser’s team unearthed a wealth of diverse artefacts from a very small sample area.

They included glassware, clay pipes, ceramics of Amerindian and European legacy, trade items such as trinkets and beads, ironware such as nails and a tool for making musket shot, and even a perfect little sewing thimble. It felt as if they had chanced on a storeroom or warehouse, but what real meaning could be learned from these relics?

The first real surprise was the date. The discovery of scores of Dutch Delft blue pottery fragments suggested the early 1600s — a century before the first records of any kind of European occupation of Dominica.

This was later verified by carbon dating charcoal fragments (related to cooking or blacksmithing) from the same soil strata. The trinkets, beads, and Cayo pottery fragments suggested contact, interaction, and probably trade between the island’s Indigenous people and the newcomers.

We know that expeditions had called at the island during this period. Sir Francis Drake’s logs state that, with the help of Kalinago, he had provisioned his ship in Prince Rupert’s Bay on the island’s west coast as early as 1565. It’s also known that, for a time, Europeans traded with the Kalinago of other eastern Caribbean islands, seeking tobacco and cotton — valuable commodities in Europe.

This was an era and a region of fortune seekers, pirates, and privateers. It was also a time when the indigenous Kalinago — and the island resources they had long depended upon — came under serious threat.

There’s evidence of numerous Kalinago settlements along Dominica’s northeastern coastline, while the island of Marie-Galante — an important foraging ground that would soon be taken by the French — is located directly across the water. Should La Soye reveal itself as an early trading outpost, it would be a new entry in Dominica’s historical record.

With his interest piqued, Hauser and his colleagues — including Diane Wallman, Associate Professor of Anthropology at the University of South Florida; and Douglas Armstrong, Professor of Anthropology at Syracuse University — managed to secure funding from the National Geographic Society and the National Science Foundation for additional studies (interrupted only by the pandemic) to further develop the curious story of La Soye.

The latest, and penultimate, field season was in July 2022. Several specialist teams collaborated, blending different areas of expertise and technologies — including soil and botanical sampling, lidar, and magnetronomy.

This resulted in a rough map of the coastal land that suggested around a dozen stone buildings and a couple of stone roads had once existed there. Hauser speculated that the settlement may well have extended from the beach into the bay, with rising sea levels perhaps eventually covering as much as half of it.

With a theoretical plan of the settlement on their laptops, the team set about excavating small test pits to verify what the technology was indicating — a procedure that’s known as ground truthing.

The excavations did indeed reveal the stone foundations of buildings and road, but they also surprised the team with evidence of wooden post holes — something the technology didn’t capture. Wooden post holes would have supported framed structures, possibly belonging to an earlier Kalinago presence. One building on top of another suggested succession or displacement.

When the team returns in the summer of 2023, it will be with the aim of excavating as much of the hidden village as possible. There will also be further efforts to understand the significance of Kalinago material culture as well as the possibility of an even earlier Amerindian presence.

So far, the story of La Soye seems to begin with an Amerindian settlement that was certainly Kalinago but may have existed even earlier. In the late 1500s and early 1600s, European vessels arrived in the bay — probably at the end of their transatlantic voyages, perhaps to undertake essential careenage and provisioning.

We can imagine first contact with the island’s indigenous Kalinago may have included basic trade for fresh water and food that developed into a more commercial (though unrecorded) exchange dealing in tobacco and cotton.

At some point, that outpost became a village, and that village eventually displaced the Indigenous people who had been there before. (It’s thought by some experts that the Kalinago were already beginning to move to higher ground from coastal margins.) And then at an unknown later date, the village was entirely abandoned.

Although the picture is becoming clearer, many questions remain unanswered. Was La Soye the domain of pirates and privateers, or perhaps the trading outpost of a French settlement in nearby Marie-Galante? How well did the European settlers and the Kalinago engage with each other? Why the name La Soye? And what predicament resulted in its abandonment?

With any luck, a final field season will shed more light on this enigmatic town beneath the sand.