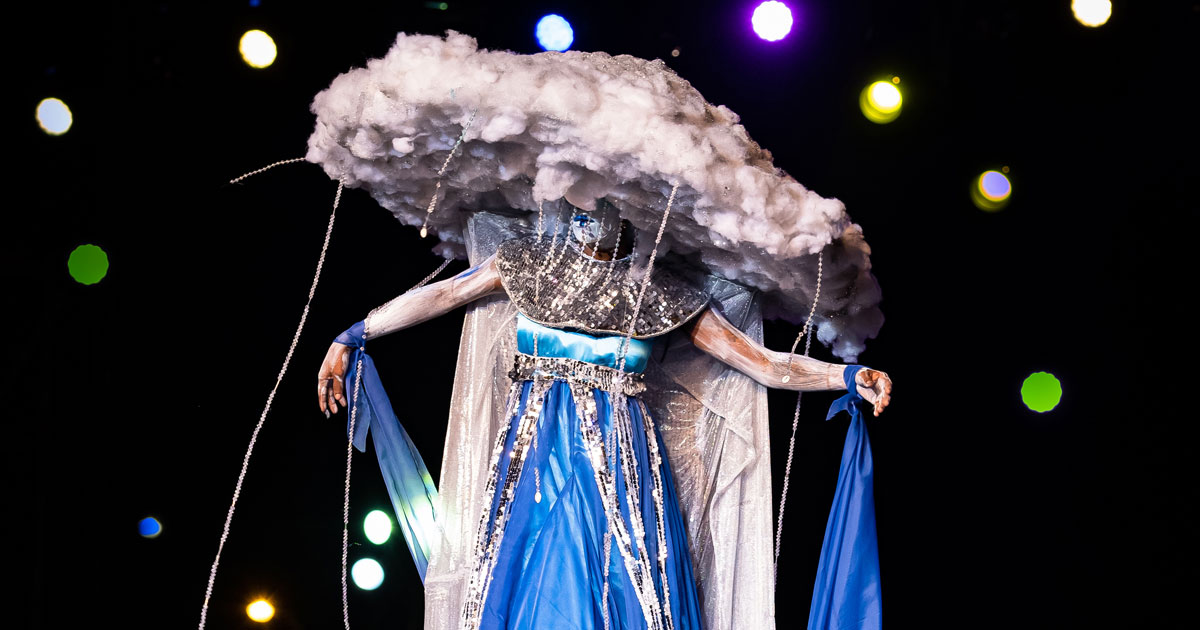 So I actually used to box before with a group in Pleasantville, where I’m from. With the coach, we normally used to go on the Wharf and train. He decided he wanted to pass and visit a friend. Lo and behold, he took us on Henry Street to Junior Bisnath, one of the moko veterans.

Anybody he meets for the first time, he always asks if you’re willing to try the art of stilt-walking — moko jumbie. So he asked us, “Allyuh want to try moko jumbie?” The rest was history … The day after I learnt to walk stilts, I gave up boxing.

I was always a person who likes to try new things. And after trying it, I got to like the feeling — it was a challenge, in a sense, because males are the dominating ones in that field. So it was just me challenging myself to see how good I could be.

Then after performing in different parts of the country and in all those Carnival events, fetes, Soca Monarch, meeting new people, going to different places — I get to “like mehself”! And you feel you have a special power when you are on stilts …

The moko community is always family oriented. Everybody just becomes one. Everybody has a special vibe. They just make you feel comfortable around other people who are doing the same thing as you. They have a better understanding. You know it’s your special place being around those specific people.

In 2012, that was the first time I entered the Kings and Queens competition, and that was through Junior Bisnath. That’s when I met Mr Alan Vaughan, the designer of Moko Somõkõw. From then we just kept on working on different things … We just clicked at that time, keeping that relationship. And when he moved on to working with Touch D Sky in 2016, I joined. And when he branched off to do his own thing in Moko Somõkõw, I was there.

As a little girl, you see the big mas on the stage for Dimanche Gras. But I didn’t even know the behind-the-scenes and preparing the mas … In 2012, Mr Alan just designed everything and put you out there.

After that experience, I was like, it’s an interesting thing to do … And then in 2016, I really discovered how good I am at making things, like designing head pieces … He’d draw out what he wanted and give you materials and then you’d have to figure out how to make this drawing come to life!

So he just helped unlock that hidden talent. After that, it just got more and more interesting. I used to dance, and used to look at Broadway and think I want to go and dance there, you know? So I never treat the competition as a competition. I treat it as that time to show off — like I’m on the Broadway stage!

Probably from September to November, Mr Alan and I start talking. We might chat about the theme. We might work out a little sketch of the costume, then mightn’t talk until December, January when he comes back to Trinidad.

Then we stay in Belmont from January ‘til March, back and forth, and have that time with each other. He’ll have his sketch for the headpiece, so it’s just to figure out how I am making this! You never have an idea how you’re going to do it … but with the materials, and the vibe … it’s just a flow you have to go with! You just have to trust the process. And you work on the headpiece because that’s the main thing over the next two months. The more you work on it, the more ideas flow.

Then leading up to the competition — the show, for me! — getting ready on the night, painting your face is when the magic starts to happen. You feel like the character starts coming on. Usually, I’ll have an idea of what movements I want to do … we’ll try on the costume at least two times before. I put thought into everything, so I think about what I want to do on stage presentation-wise.

With 2022’s portrayal, I had an extra lot of thinking to do because I was about four months pregnant … You know people will say it’s risky, but I was just doing what I’m accustomed to doing. I wouldn’t just throw up one foot in the air — it would be subtle movement where it would look graceful and be less likely to make me fall. So I thought about the music as it would need to be a little slow, because I’d need to take my time. And then the energy I’d give off — the theme of the costume — is that I’m the “bringer of good things”.

But then on the day of the finals, they wouldn’t let me go on the stage … The rain was falling, so I could understand safety concerns. When I got the call about it, I was doing some last-minute things. Hearing those words — “they won’t let you go on the stage” … I started to cry. Like a baby. People started to post things online, and I know a lawyer got involved …

But for me myself, I decided I was going to the Queen’s Park Savannah. Still, I started to doubt myself. I was watching the stage, feeling it out … the surface was alright, even though it was wet. One of the dancers was saying the stage was slippery, making me doubt whether I could really do this.

Lisa Fernandez and Maria Nunes came with well-wishes and hugs and were taking photos … and they weren’t looking at me like I was “pregnant Shynel”, but like I was “Shynel Shynel”. Even if they did have concern for me going on to the stage, it didn’t show. And it made me think, why don’t you believe in yourself?

I got to the stage, and I was still a little shaky. But then as the music started to play, I said to myself, “You have this, girl! Do your thing!” I am performing on stage and all that is going on in my head is, “Girl, dance, eh? You’re safe here!”

When I won again, I was in shock … I know I put on a good show, but with everything that happened, almost being disqualified … Getting to be on the stage and performing was the most important thing. Up to this day, I still can’t say how I felt that night.

When I think about when I first won in 2019, I always feel a little bit intimidated because of the size of the other queen costumes. So you’re not really looking to win, in a way. I always think they’re judging for big costumes … So I was in shock then too.

That year, I was on the road Carnival Monday and Tuesday with my son as a baby. That was my first child and I am in to breastfeeding, so he was always with me in the mas camp, everywhere … So if I’m on the road, obviously I have to feed him! Then people saw us on the road and posted the photos. The positive response was really unexpected.

This year, moving up to Belmont will be different with my kids in school, but I have people who support me, so it will be fine. I’m really looking forward to being on the road … that road action again with Moko Somõkõw.