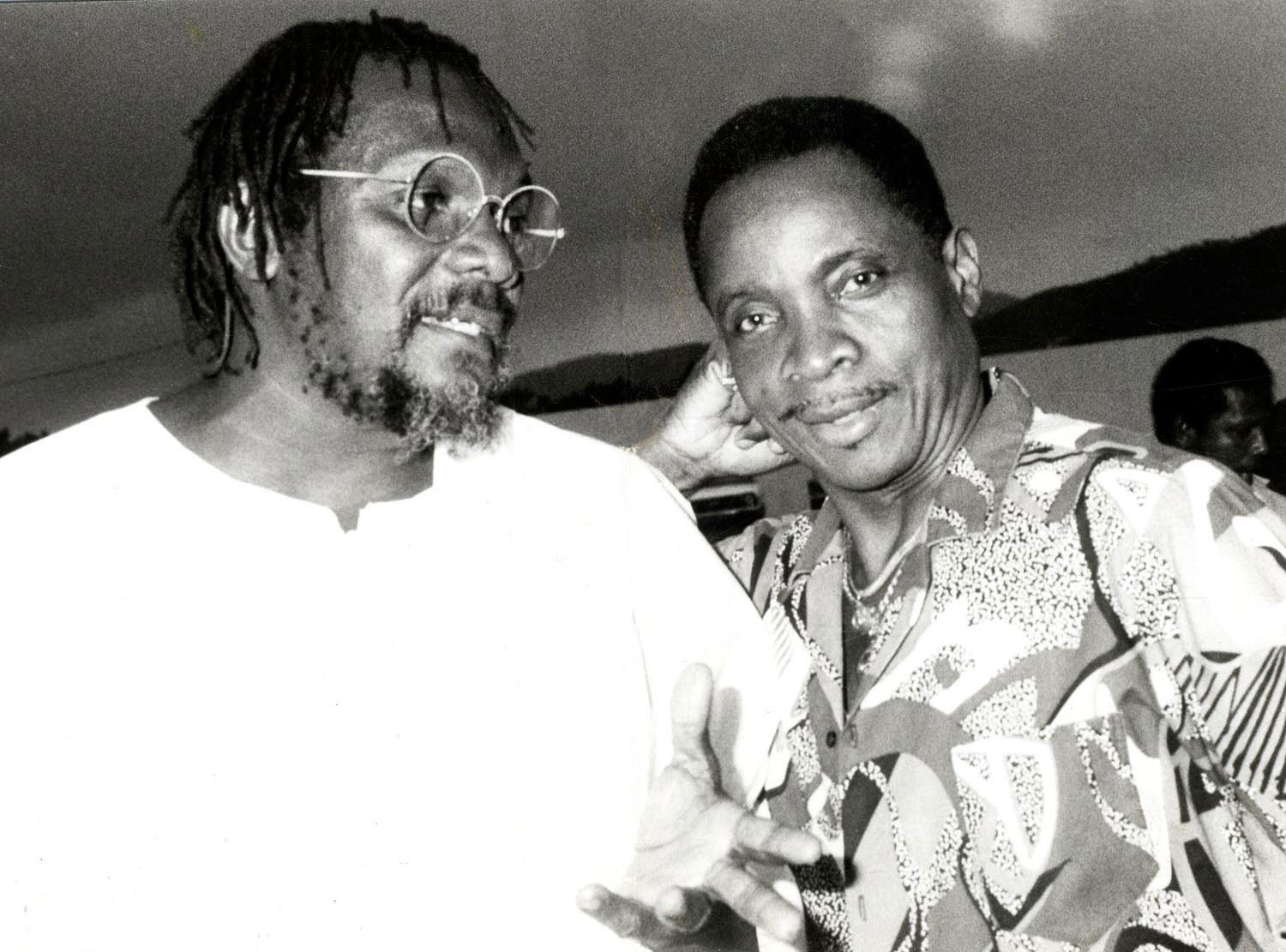 In 1973, 50 years ago, there was a dramatic evolution of the calypso — a redefinition of the sound and the business of Carnival music.

Today, Carnival in the Caribbean and across the diaspora has a main soundtrack: soca music. How this music came to define the Caribbean Carnival experience for many, in Trinidad & Tobago and elsewhere, is an exercise of sifting through myth and apocryphal stories, deciphering competitive agendas and egos, and defining a unique space within a global music industry — beyond what Nobel Laureate Derek Walcott describes as the region’s encouragement of “the delights of mindlessness, of brilliant vacuity”.

New World music — calypso, jazz, rock ‘n’ roll, reggae, hip-hop, and dancehall — arises from a community of musicians, singers, and interestingly the media that reports and encourages its development and growth. However, it is sometimes easy to attach one man’s name to the creation and development of new music genres in the Americas — James Brown for funk, DJ Kool Herc for hip-hop, and Antonio Carlos Jobim and João Gilberto for Brazil’s bossa nova.

For soca, a credible case can be made for innovative calypsonian Lord Shorty’s name to be attached to this genre’s genesis, and the song that started it all: his 1973 tune “Indrani”.

Born Garfield Blackman and over six feet tall, his original sobriquet was quite ironically Lord Shorty — but he would later use the name Ras Shorty I, after a spiritual conversion in 1980, until his death in 2000. He ultimately gave the sound and rhythm a name, albeit sokah — a journalist’s misspelling shortened it to soca.

He gave the genre’s origin story a persistent, oft-repeated narrative:

The purpose of soca in the 70s … was to bring the East Indians and the Africans together. So, there was a combination of the two main rhythmic structures in Trinidad to create a sound that would be totally Trinidadian … It is not soul as in American soul [music], but the soul of Trinidad, the soul of calypso … It all started with “Indrani”.

The first song that starts a genre is usually identified, in hindsight, by music experts who describe characteristics and instrumentation. Here, propulsive bass over a constant percussive groove with the high-hat mirroring the kick drum, and snare drum syncopating alternately in a tresillo rhythm. It was a musical evolution in a socially re-awakened Trinidad, as 1970 island turbulence begat cultural pride and inward inspiration for creativity.

Effectively born from a need to update calypso — and hopefully cross over to a wider audience outside the earnest Caribbean diaspora in North America — soca music began to sonically define the Carnival experience from the 1970s, and has continued to through the present.

These sole originator stories abound with hyperbole: Little Richard on rock ‘n’ roll (“I say I’m the architect”); or Jelly Roll Morton on jazz (“I, myself, happened to be creator”). Lord Shorty was no different: “I am the inventor, and nobody else”.

Origin stories, however, can be challenged. The names of artists, and the various studio musicians at the important KH Studios in Port of Spain creating that new music in the early 1970s are in the mix for future generations to assign fame or infamy: calypsonians Maestro, Shadow, and King Wellington; and music arrangers Ed Watson, Pelham Goddard, Art De Coteau, and Robin Imamshah.

Soca would become an all-encompassing catchphrase to define music that drove Carnival revellers to frenzied joy. The vibe and energy it provides are addictive and attractive. Despite the initial doubts of longevity and popularity beyond a passing fad, calypso icons soon jumped on board the soca train: Calypso Rose with “Give More Tempo” (1977), Lord Kitchener with “Sugar Bum Bum” (1978), Mighty Sparrow with “Soca Disco” (1981).

Brooklyn, New York became a hub for soca’s global spread in the 1980s, with Caribbean entrepreneurs — Rawlston “Charlie” Charles, Granville Straker, Michael Gould (B’s Records) — doing major business. Other islands picked up on the evolutionary sound of soca, which was no longer moored to Shorty’s idea of fusion of African and Indian rhythms.

Antigua’s King Short Shirt with “Tourist Leggo” (1976) forced a xenophobic response to what could be considered a Road March, the most played song on the road: “Not a Trini, no road march”. It mirrored Art Blakey’s famous axiom, “No America, no jazz!”

The Caribbean came forth anyhow. Montserrat’s Arrow has possibly the most widely known soca tune, “Hot, Hot, Hot” (1982). Barbados launched a musical invasion on Trinidad Carnival in the mid-to-late 1990s that changed how the swing of the music evolved; it became groovy.

Grenada-born William Munro in 1993 introduced the Soca Monarch competition, dubbed the Superbowl of soca music, cementing superstar status to a new breed of soca artist: the iconic Superblue, the durable Iwer George, the lyrically skilful Bunji Garlin and his wife the trend-setting Fay-Ann Lyons, and the next generation star — Voice.

In his 40-year career, soca’s biggest superstar, Machel Montano, made collaborations with major artists in other genres a key to his global recognition, pushing the possibility of soca beyond the boundary. As the music modernised in the 1980s — with synthesisers replacing musicians and DJs replacing live bands — international pop began to influence compositions.

Soca mimicked whatever was hot — hip-hop/R&B, dancehall/reggae, EDM, and lately Afrobeats — or boldly interpolateds pop melodies from Enya, A-ha, Cyndi Lauper, The Police, and U2 into soca beats in its quest to break out of the cocoon of Carnival festival music, and become the new popular music from hot latitudes, much like reggae and dancehall, bossa nova and reggaeton have done. Even Guyanese music icon Eddy Grant tried to make ringbang — his trademarked facsimile of the soca sound — a hit in the United States, with limited success.

The remix route became the business model for success beyond the diaspora. Vincentian Kevin Lyttle made serious headway into the Billboard Hot 100, peaking at number four with “Turn Me On” (2003); and Barbadian Rupee had his song “Tempted to Touch” (2002) included in a hit movie, moving that song into the Billboard Top 40. A 1987 cover of Arrow’s “Hot, Hot Hot” by Buster Poindexter and Baha Men’s 2000 cover of Anslem Douglas’ “Doggie (Who Let the Dogs Out)” brought US chart success and a Grammy, respectively.

These singular achievements mask the continuing broader struggle for soca to break out into the wider public consciousness beyond Carnival, or in these cases, music for summer up north. On modern streaming services, soca is wilfully labelled “reggae” to get top-tier algorithmic recognition not accorded to soca. The analytics show that reggae/dancehall’s and reggaeton’s popularity, relative to soca, is 10 and 100 times greater, respectively.

Calypso is a lyricist’s and performer’s art, and soca has become a producer’s art. The rise of the “riddim” in the 2010s (one musical bed, many songs — mimicking dancehall’s and early calypso’s economy of production) has generated popular uptake, but limited unique proliferation.

The fete aesthetic rules modern Carnivals. The music is about movement and getting a physical response. Lyrics expressing carnal desires overshadow many soca songs about love, female empowerment, or Caribbean society.

Has soca encouraged Walcott’s “brilliant vacuity”? Not necessarily, as it has also become the driving force to an evolving and diversified Caribbean music industry.

Fifty years beyond “Indrani”, soca is now Caribbean music; artists, songwriters and producers from all the islands reign. St Lucian Dennery segment, Grenadian jab music, Dominican bouyon, Barbadian bashment soca, and more island music genres all exist commercially in the soca space despite their various origins that have nothing to do with Lord Shorty’s thesis of upending calypso’s stasis.

Lord Shorty once said, “Sokah is the power of movement”. He did not lie. The Soul of Calypso has practically and aesthetically become the Soundtrack of Carnival, and the constant chameleon-like development of soca means it will be more than that in the future. And we will still be jamming to the beat.