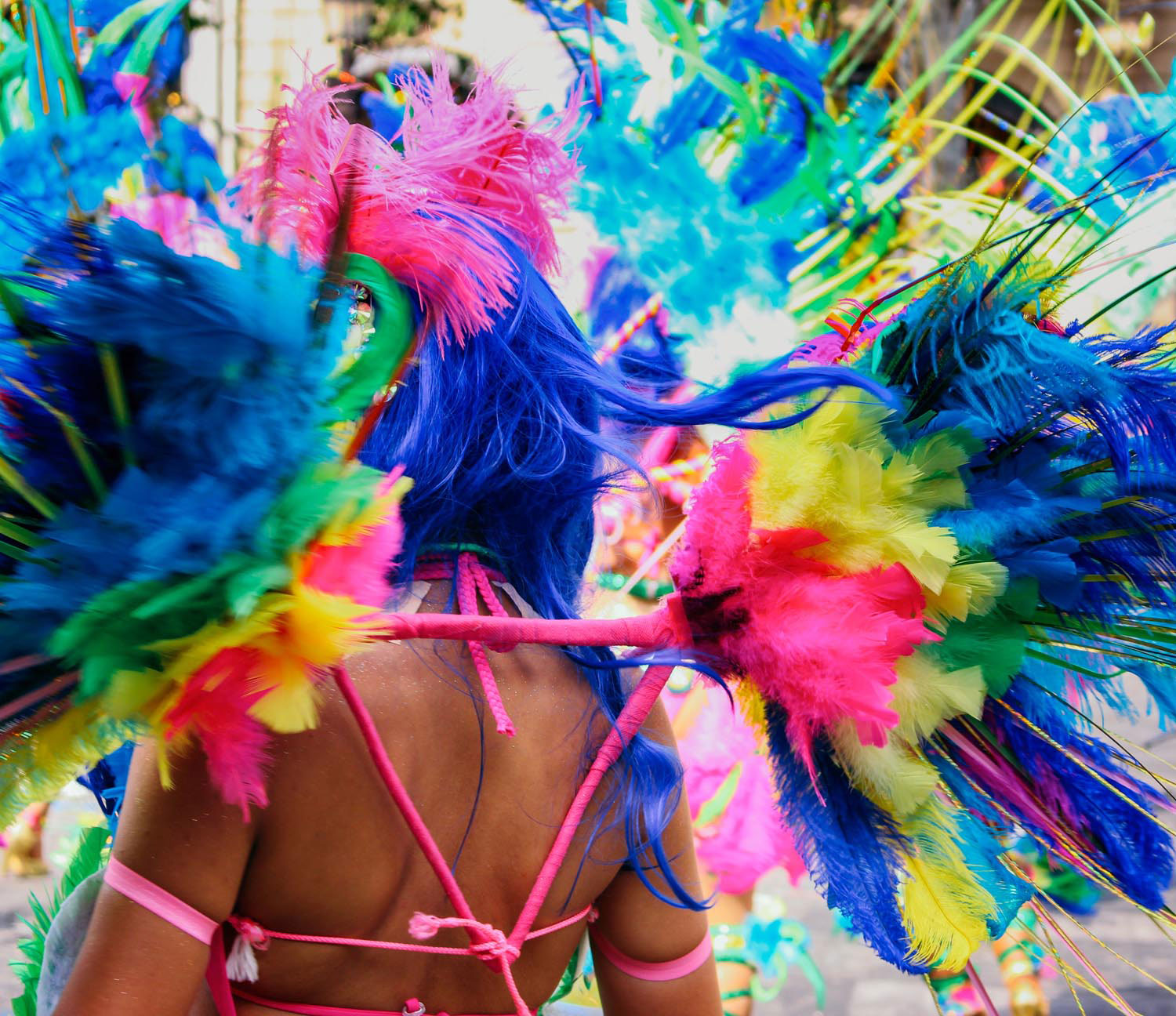 Tobagonian Danii Mcletchie, a 20-something environmental expert, loves J’Ouvert. The early-morning party-parade, which kicks off Trinidad & Tobago Carnival, is her favourite part of the festival.

“You come as yourself. You can dress up, you can dress down. You come as you want to. Nobody looking at you. Nobody judging you,” she raves. “Carnival is freedom, liberation, happiness. And I think J’Ouvert is the epitome of that.”

It seems fitting that an environmentally and socially conscious person prefers J’Ouvert — where masqueraders often cover themselves in mud, paint and oil — to the parade of extravagant and expensive costumes seen on the second day of Carnival.

On the surface, it seems like J’Ouvert is more sustainable. Unfortunately, this isn’t the case.

Mcletchie and high school friend Luke Harris in 2018 co-founded a company, Carnicycle, to collect and rehabilitate used Carnival costume materials — mainly beads and feathers — and resell them at reduced prices. They also sell fashion accessories like handbags and earrings made from the collected materials. They work to educate people about the importance of making the festival sustainable.

After starting with the Jamaica, Barbados, and Miami carnivals in 2019, 2020 was the first time Carnicycle operated in T&T. Based on what was deposited in collection bins placed across the islands, Mcletchie and Harris realised J’Ouvert contributes a lot of the estimated 7,500 pounds of waste generated by Carnival every year.

“J’Ouvert bands will print t-shirts and bodysuits for people to wear, and some people wear them once and then just toss them away,” explains Mcletchie. “We were surprised to see all the shoes in [the bins],” she said. “If you’re a foreigner you probably don’t have time to clean your shoes, and you’re not taking back dirty shoes with you. It makes sense, but it wasn’t something we thought of initially.”

Trinidad & Tobago’s carnival is one of the most influential in the world, probably only second to Rio’s in terms of reach. It has spawned more than 100 copies across the globe. This includes North America, Europe and Asia. The most recent Trini-style carnival was founded this year in Bali and took place over six days in September.

The carnivals are essentially costumed street parties with masqueraders dancing to soca and steelpan. Fetes and other cultural activities lead up to the main event.

Over the two days of Carnival more large crowds gather around T&T than at any other time of the year. More visitors arrive than at any other time. More disposable containers, cups and utensils are used and discarded. More drinks and snacks in plastic, glass and aluminium packaging are consumed.

At a seminar co-organised by Carnicycle in 2020 about making Carnival sustainable, it was disclosed that 52 materials used to make Carnival costumes were harmful to the environment.

If any event needed an injection of environmental consciousness, it’s Carnival.

Mcletchie and Harris hope that the influence of the T&T carnival means a sustainability movement started here will spread to the other carnivals.

“CEPEP [the Community-based Environmental Protection & Enhancement Programme, a state agency] does its best to clean up the street during the parade,” she continues. “But the truth is there’s a lot of waste that does not end up in the landfill. Where does it go? It goes in the drains and then it goes into our oceans and it’s damaging the environment.”

Carnicycle — which recently became a non-profit — works through various corporate and NGO partnerships. For instance, the collected clothes and shoes were cleaned by industrial washing machines and dryers at the Hyatt Regency, where a collection bin was placed during and briefly after Carnival.

Clothes and shoes were donated to the charity Barters for Babies for distribution to the needy.

Perhaps Carnicycle’s most important partnership so far is the one it has formed with Tribe, the largest mas band in T&T. There was a collection bin in the band’s mas camp in 2020. This past August, Tribe donated 300 excess costumes to Carnicycle.

The 17-year-old band had previously taken action to reduce its environmental impact. In 2019, it switched styrofoam food containers and cups for compostable alternatives. That year at its annual Ice Fete, it didn’t offer plastic straws and provided collection bins for recyclable products.

A Tribe spinoff band started in 2015 — The Lost Tribe — doesn’t use feathers and uses materials and designs that make it easier for the masquerader to reuse parts of their costumes. The Lost Tribe won large Band of the Year in 2019. Its success opens the possibility that other bands might adopt its approach.

Carnicycle interviewed Lost Tribe designer Atiba Borde for its blog: “The band has become a featherless band — prohibiting the use of feathers in designs. This allowed designers like myself to be more sustainable and creative when procuring materials,” said Borde. “I try to replicate this way of designing when designing for other bands. I also try to create designs that masqueraders would want to incorporate into their wardrobe so that the costume is not a single-use piece.”

It’s an approach similar that of K2K Alliance & Partners, a medium-sized band founded in 2011 that has copped the Band of the Year title in their category several times. They launched the band with a “365-Day Concept”, encouraging masqueraders to use their Carnival costumes well after the season, for many years to come.

Mcletchie would like to see all bands adopt a sustainable approach to how Carnival costumes are designed and constructed, and the materials used.

“Costumes the way they are currently designed are really for one-time use. What we call fast fashion. There is no current reuse of costumes from last year to the next year,” she said.

Carnicycle for now is looking to partner with other Carnival bands in collecting discarded costumes.

“It’s cheaper to the band to not have to pay these costs year after year because they’re reusing things,” she said. “And ultimately we hope it can be cheaper to the people who are playing mas… Our end goal is to make Carnival not just environmentally sustainable, but also socially sustainable so that everybody can feel like they have a place in Carnival.”