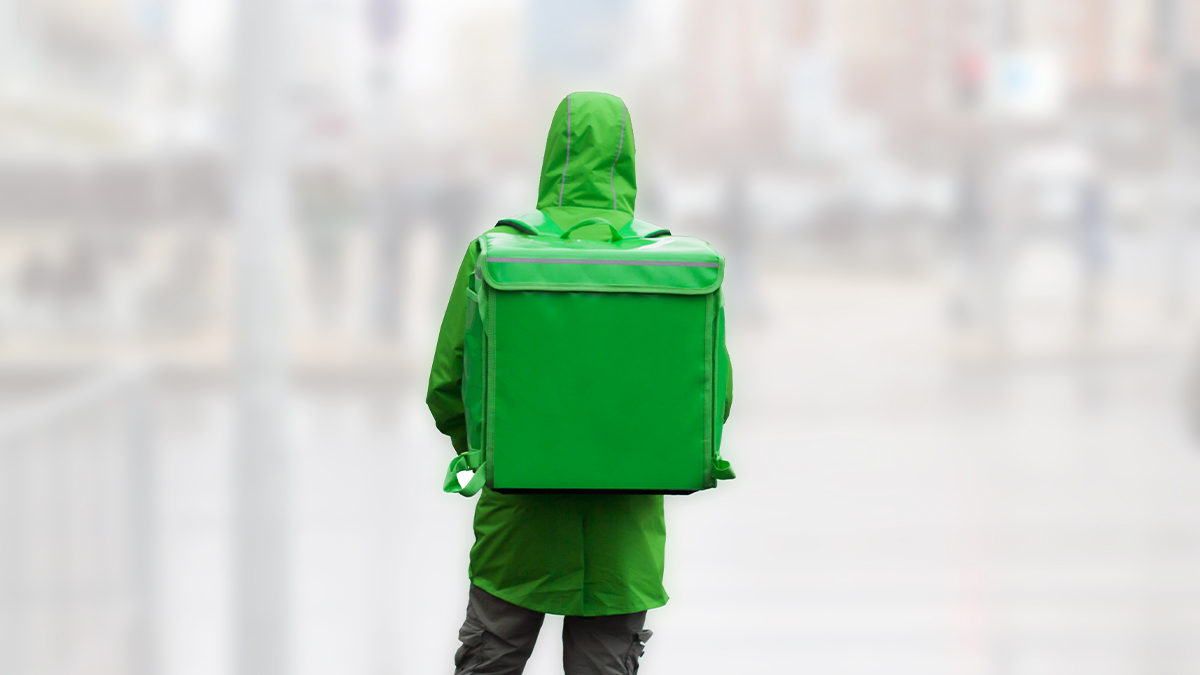 Of course Friskies Shreds wet cat food was on the bottom shelf of the last aisle I checked. It was just that kind of day. As I crouched into a kneeling position to inspect the inventory, I scanned the customer’s order glowing back at me on my smartphone: “Any seafood shreds with and without cheese. Twenty cans variety of flavors.” But doesn’t “variety of flavors” contradict the more specific request for “seafood shreds with and without cheese”? Or maybe the seafood category includes multiple flavors? Am I overthinking this?

As a business school professor — and, importantly, not a cat owner — my experience that day was atypical. As a driver for Postmates, however, it was just one of the 238 deliveries that I completed for the popular food delivery platform as part of an 18-month immersive research project to better understand the strategies that drivers use to craft a meaningful work identity. During my time as a Postmate, I drove for 130 hours, interviewed other drivers who had collectively completed 170,000 rides and deliveries on similar platforms (Uber, Lyft, DoorDash, Grubhub, Instacart, etc.), attended in-person and virtual company meetings, and reviewed and contributed to driver forums on Facebook, Reddit, and other websites.

In one sense, my recently published findings are not surprising. Like many app workers in the on-demand economy, I too had customers berate me for not having a clairvoyant understanding of their apartment building’s layout, parking restrictions, or door access codes. I too barely managed to earn more than minimum wage, despite selectively driving in some of the most lucrative markets in the country and using the most effective strategies I knew (such as resisting the urge to chase the notoriously quick-to-cool “hot spots” across town, avoiding neighborhoods with too many maze-like apartment buildings, and prioritizing multiple deliveries in one transaction over single orders).

However, my findings also point to something deeper and perhaps more concerning about the changing nature of work and our relationship to it that transcends app work in the on-demand economy. What I observed and experienced was a system that suppresses workers’ uniqueness, experiences, and future aspirations. It was a system that treated people like lines of code to be deployed instead of humans to be developed. This is problematic because work is not simply the translation of physical and intellectual effort into money. What we do on a daily basis for work is part of our broader life narrative that makes us who we are.

Historically, organizations have played a crucial role in defining these evolving stories for employees by providing them with the physical, social, and psychological space needed to process and cope with confusing, disturbing, or anxiety-provoking work situations. For example, traditional organizations offer their employees the appropriate setting and resources to receive or provide advice, encouragement, feedback, and training; to help a colleague solve a problem or work through a negative outcome; to cultivate social connections through a secure and predictable network of coworkers, supervisors, and mentors. Collectively, these features of traditional organizations help employees answer the question “Who am I?” in the context of their work.

Many drivers in the on-demand economy, I found, struggled to answer this question. One driver I interviewed explained, “I try to bring my personality, but the app itself doesn’t really offer that…the app sets the precedent to dehumanize…if you don’t try to inject your personality, it just washes it out…I feel like a robot by the end of the day.” A different driver put it more bluntly: “The driver is invisible [to customers]…the driver doesn’t exist…it’s like you’re not really there.”

It was not until I drove for more than 40 hours in one week in Las Vegas that I finally felt this reality myself. As I wrote in my research paper, what I experienced, and what many of the drivers I interviewed described, was akin to laboring on a stationary bicycle that is literally suspended, unable to gain traction on the path, any path, below – pedaling frantically, yet futilely; technically untethered, yet uninspired; at once dynamic and static.

This contrasts sharply with the messaging that platforms use to attract drivers: You can “move forward without limits” (GrubHub) as you “drive toward what matters” (Lyft). “From aspirations to relationships” (GrubHub) “no matter what your goal is” (Amazon Flex), you can “achieve your…long-term dreams” (DoorDash) because “you move the world” (Uber). At the end of the day, “you’re the boss!” (Waitr). Yet, these possibilities felt elusive, if not insulting to drivers, many of whom felt “stuck in the cycle [of driving]…going nowhere and this is month after month after month,” as one driver explained to me.

Frustrated by the platforms’ unfulfilled promises, many drivers described exploiting a fundamental irony of on-demand work: The same characteristics that drivers experienced as threatening and depersonalizing (exposure to algorithmic management, no access to coworkers, few legal protections) also reduced personal accountability concerns. “You are in a car, in a private setting…you will never see that person again, you have no obligation to them,” said one driver. Another driver added: “If you’re in the corporate world and you are sitting with your boss…you need to be careful what you’re saying, and how you’re reacting…But in driving…if I say I like blue, and you don’t like blue, I don’t care, you know…because my manager is not going to look at me.”

Outside the scrutiny of coworkers, supervisors, and repeat customers, some drivers successfully clung to unchecked fantasies about a more desirable future. (“Every day you meet many people [while driving], one of them can change your life!”) Others rationalized away the more common negative experiences they encountered while driving (one driver claimed to have “a pretty good track record” having “only had one barfer and one person urinate in my car”). In addition to internally shaping, if not distorting their experiences, many drivers retreated to private online driver groups on Facebook and other platforms to exchange stories about the good and the bad; the absurd and the hilarious — seeking to negotiate their personal narratives by connecting with and comparing themselves to other drivers. These identity management tactics provided drivers with just enough psychological relief to continue driving.

When I decided to end my voluntary immersion in the driver community, I could not shake the feeling that the depersonalization of app workers is a feature, not a bug, of an economic model born of and emboldened by transformations that are underway across the global economy. This includes increasingly prevalent work arrangements characterized by weak employer-worker relations (independent contracting), strong reliance on technology (algorithmic management, platform-mediated communication), and social isolation (no coworkers and limited customer interactions).

Importantly, the effects of these transformations reach far beyond the type of low-wage gig workers that I studied; freelancers more broadly face similar existential questions and challenges. With the coronation of agile workforces and customer-first philosophies nearly complete, the psychological contract — the unwritten expectations and obligations between workers and organizations — is at risk of being re-written before our eyes. Indeed, the three C’s underlying strong psychological contracts — a career that offers personal growth and upward mobility, a community that fosters social connections and belongingness, and a cause that infuses one’s work with meaning and purpose — are all but absent for independent workers of all stripes.

At the core of the issue are changing preferences and practices with respect to “renting” instead of “buying” talent to meet organizational objectives. For example, a survey of C-suite executives and senior managers revealed that more than 90% think that leveraging digital freelancing marketplaces is either “very important” or “somewhat important” and more than 50% reported that their expected use of digital talent platforms in the future “will increase significantly.”

From this perspective, the 40 million Americans who have rented out their services to technology platforms like Uber, Lyft, and DoorDash may be canaries in the coal mine of the new world of work. What they experience today, millions more are likely to experience in some form in the future.

Of course, there are no easy solutions to these issues; many are existential and will require a reckoning involving values and priorities at the societal level. In the meantime, familiar ways of becoming and expressing oneself at work may no longer hold. As forces continue to erode traditional forms of identity support, meaningful self-definition at work will increasingly rely on how we collectively use and misuse innovative technologies and business models.

For example, how can companies deploy algorithmic management in a way that doesn’t threaten and depersonalize workers? How can focusing on the narratives that underlie and animate identities help workers reimagine what they really want and deserve out of a career coming out of the pandemic and the Great Resignation? Will increasingly immersive and realistic digital environments like the metaverse function as identity playgrounds for workers in the future? How will Web3 broadly, and the emergence of novel forms of organizing specifically (e.g., decentralized autonomous organizations or DAOs), affect the careers, connections, and causes that are so important to workers? What role can social media platforms, online discussion forums, and other types of virtual water coolers play in helping independent workers craft and sustain a desirable work identity? In short, how can we retain the human element in the face of increasingly shrewd resource management tactics?

Now is the time for us to earnestly engage with these questions — from those who design, lead, and regulate these technologies and business models (software engineers, CEOs, and politicians, respectively) to those who study, teach, and help others cope with the implications of them (researchers, educators, clinical psychologists, respectively).

Hanging in the balance is the well-being of independent workers the world over, many of whom are struggling to answer the question “Who am I?” in the context of their work.