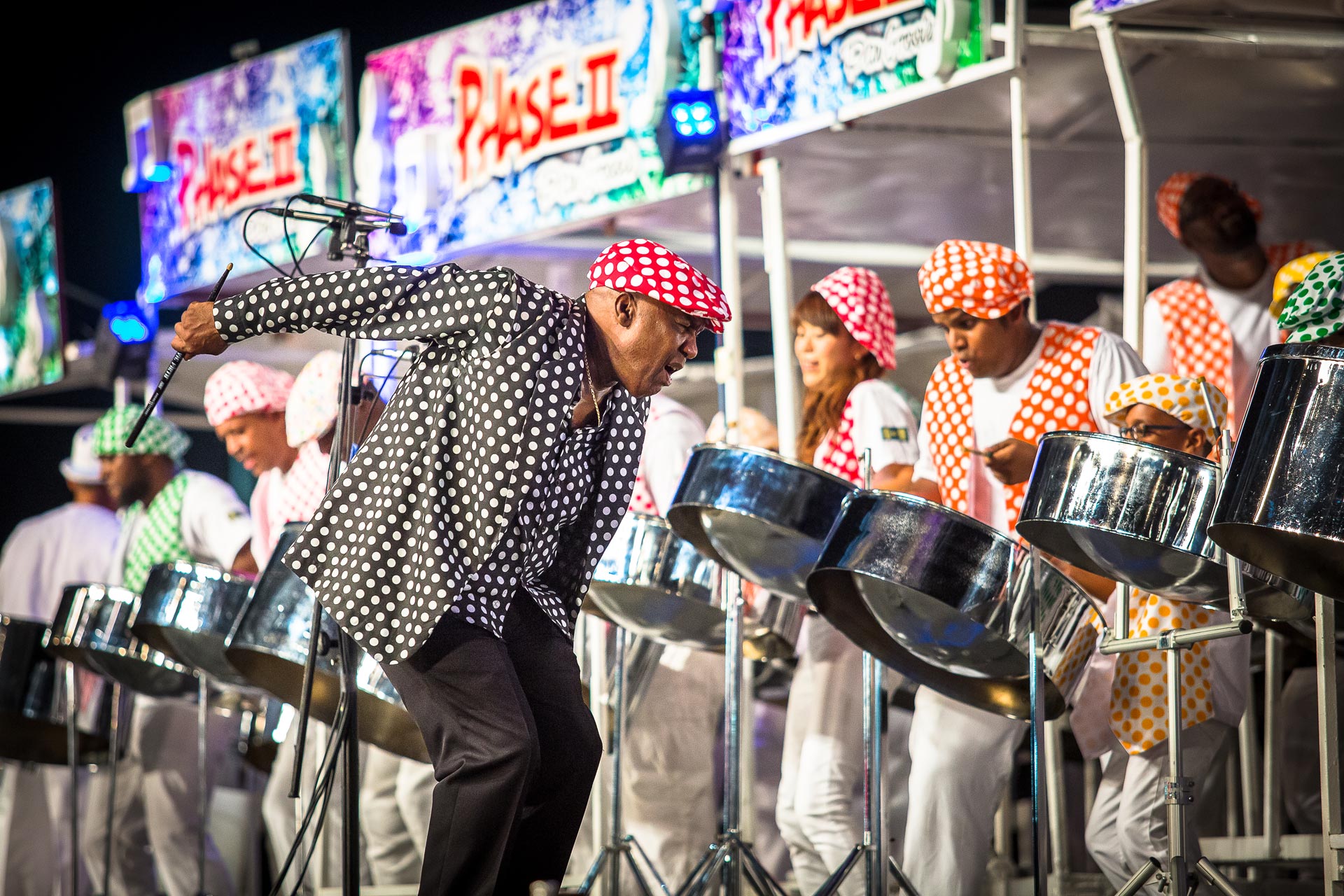 Caribbean creative and cultural institutions that have achieved the half-century mark are not rare — the National Dance Theatre of Jamaica and the Trinidad Theatre Workshop, for example. But the ongoing adulation and newsworthiness sometimes peter out — not so much as a sign of decrepitude, but possibly as a signal of lagging public awareness and commercial support.

In 2022, HADCO Phase II Pan Groove turns 50. With that landmark, it joins the pantheon of legendary bands that paved the way for sustaining an original sound born in the Caribbean, and elevates the idea that “the audacity of creole imagination”, as coined by steelpan researcher Kim Johnson, has gone global. The band could be a case study for a modern consideration of steel orchestras.

The names of pioneer steelbands formed in the 1930s and 1940s — Renegades, All Stars, Desperadoes, Casablanca, Invaders — suggest both a combative spirit that was a hallmark of early pan life, and the fantasy of cinematic imagination. Phase II Pan Groove, by contrast, was born in the turbulent 1970s. It was a time that saw Trinidad impacted by American Black Power animus, heralding an awakening of cultural pride among a new generation of musicians. They sought new sounds, and to distance themselves from a colonial past.

Phase II would be the bellwether of steelbands born in this era, as it trod an uneven path towards self-identification, self-sufficiency, innovative creativity, and commercial independence. It survived the flux of Caribbean entrepreneurship. But before one gets to 50, a little historical context is needed.

In Trinidad’s steelband movement, those early aggregations — once described by travel-writing collaborative Dane Chandos as “serving as nuclei for the organising of gangs of petty criminals” — had evolved in 20 years to what Chandos later described as having “done much to lessen delinquency in the islands, both by giving the young people an interest and by directing any antisocial tendencies of Trinidadian youth against rival groups rather than against society at large.” By the 1970s, musical competition was primary, and burgeoning commercial connections were developing beyond patronage toward an industry of music.

In the new milieu of 1972, a 19-year-old Len “Boogsie” Sharpe and five other similarly young steelbandsmen, all from popular band Starlift — Selwyn Tarradath, Rawle Mitchell, Andy Phillip, Noel Seon, and Barry Howard — decided to split away to forge an identity of their own making, to “try and make it outside”, as Sharpe says.

Practising originally in Tarradath’s garage as, in Sharpe’s words, “a six-piece combo using the pan”, before moving across the road to the current panyard, they evolved into a phenomenon. Youthful hubris, Caribbean boldfaced-ness — call it what you want. The results after a half-century tell their own story: nearly two dozen top-three placings so far, including seven national Panorama championships (the World Cup of pan) beginning in 1987 — and all with original compositions and arrangements by Sharpe.

With his prodigious pan-playing skill and talent, Sharpe has variously been called “the Mozart of Pan” and “our steelpan savant”, and has been the heart and soul of the band for these 50 years, serving as its musical director, arranger, composer, and de facto leader. “I born in a panyard in Benares Street, St James,” he says — and that environment nurtured a proficiency toward music that still awes.

In a 2002 Caribbean Beat article by esteemed musician and artist Pat Bishop, Sharpe was described as “a composer who can neither read nor write music but whose sense of musical adventure is highly developed”, and whose music “could hold its own in the wider world of musical composition, if Trinidad ever got around to taking its music seriously.”

In the 20 years since Ms Bishop’s indictment of the island, Sharpe and Phase II Pan Groove have benefited from a wider public awareness of steelpan music’s importance in its national identity, and the public in turn has profited from new music that elevates and continues to make new fans. “The band was young and we were doing things differently,” says Sharpe.

Beginning in the 1980s, as the band began gathering accolades, Sharpe was prolifically composing and arranging music that flirted with jazz improvisation and world music fusion — even classical — and recording too. His influence on a generation of players is noted through recordings by players in many countries who cite him as a primary influence.

Sharpe was unconsciously vying to be the face of steelpan in the global music industry with foreign-based musicians such as Rudy Smith in Scandinavia, and Othello Molineaux and Andy Narell in the US. His brand was in demand, doing recording sessions with jazz giants like Monty Alexander, and live gigs with Max Roach and Gary Burton. By the 1990s, the band was touring continents.

Within the band, there was an internationalisation of the players and a democratisation of the panyard: women were in the front lines as section leaders and drill masters. Varying nationalities, races, ages, sizes all came to do service in the “house of Boogsie” — Japan, France, the UK, South Africa, and all the ethnicities within made up this global conglomeration. The panyard became a locus for creativity, for communality — for a congregation of the curious at the periphery looking in.

That panyard, now called D’Village, began as a clearing at the end of a cul-de-sac in Woodbrook, a middle-class Port of Spain environ. It is “a liming spot”, says Sharpe, that today — with the help of its new sponsor HADCO (a Trinidad-based distribution company) — is a commercial centre of music appreciation, and social recreation that is unique to this country.

Sharpe says that they were proud of being an unsponsored band for many years, only taking an official sponsorship from a state-owned oil company, Petrotrin, in 1999. That ultimately lasted 16 years until the connection with HADCO. In what can be described as a synergy between mavericks, this commercial connection goes far beyond HADCO’s goal of “creating shared value” with its sponsorships.

Sharpe tearfully recounts his gratitude for the company’s co-CEO, John Hadad: “That man is responsible for my life.” Biographies of music geniuses often come around to a harsh reality of drug addiction. Hadad’s company paid for a detox programme that Sharpe insists was necessary for him to continue towards this milestone with the band. “I am four years clean. My life is pan. The instrument? That is my life,” says Sharpe as he reflects on his renewed personal existence.

In 50 years, a lot can happen. A life can be fully explored from birth to death. For collectives in the music industry — in a place like Trinidad & Tobago with a constant ebb and flow of choice and loyalty — sustaining a level of importance and functioning as a stage for continued engagement with a wide cross-section of the population are cherished attributes.

Phase II Pan Groove, the players, the sponsor, and its leader represent the possibilities for the development of a native musical language that resonate in spaces of academe and leisure everywhere. The band evolved from a group of youngsters who, as Sharpe describes, would “walk the pan to the Savannah” for Panorama in 1973, to being heralded today as one of the Big Five steelbands, and Sharpe receiving national awards and an honorary doctorate for his cultural significance.

Phase II Pan Groove’s journey was blessed by a suburban milieu that reflected an international face, by inspired corporate connections that have delivered positive benefits to the community, and by leadership from a sometimes-tortured genius who continues to make music that people still want to hear. “The band is a vibe,” Sharpe says. And that is not a trite cliché. It is a youthful destiny fulfilled.