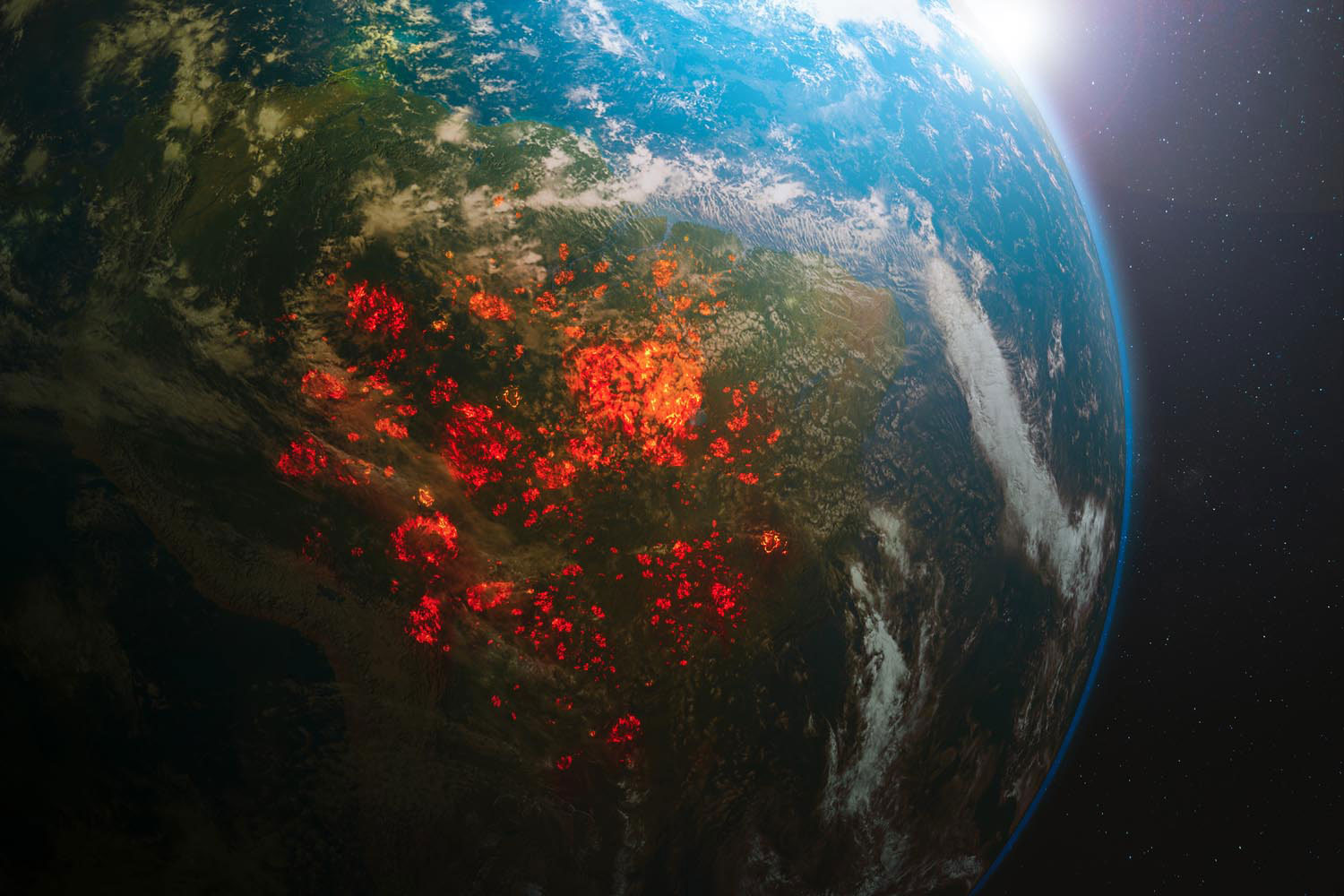 Anyone regularly watching or reading news reports about the impact of the climate crisis on the Caribbean would have heard those words ad nauseam.

But with the release of the latest Intergovernmental Panel on Climate Change (IPCC) report in the last 18 months, government leaders, activists and scientists in the region have even more reason to use those words.

The report warned that the continued increase in greenhouse gas emissions means that if urgent steps aren’t taken, global warming will go far beyond the goals set in the 2015 Paris Agreement  — causing devastating natural disasters, accelerated degradation of the environment, and widespread loss of life and livelihoods.

Small island developing states (SIDS) like those in the Caribbean are among the most vulnerable because of our size, income levels, and location.

Following disappointment with the outcome of COP26 in Glasgow (the last international meeting on climate change) and the findings of the IPCC report, Caribbean leaders organised a meeting in advance of COP27 (6–18 November in Egypt).

An initiative of Bahamian prime minister Phillip Davis, the meeting was the first of its kind — and one Caricom hopes to make a regular part of its schedule. Leaders, representatives of international organisations, and other stakeholders met for two days in Nassau last August.

“The time for action is now. The time for talking needs to cease,” Davis said at a press briefing at the start of the meeting.

The Bahamas is still recovering from Hurricane Dorian, one of the most destructive storms ever to hit the region. Storms of increased intensity are one of the climate crisis’ most significant impacts.

The Office of the Prime Minister’s YouTube channel uploaded a video — Upclose: The Courage to Rebuild — a few weeks after the meeting to mark Dorian’s third anniversary. It showed a woman, Baronette Thomas, weeping as she visited where the home she shared with her husband and three children once stood.

All four of them were killed, along with 74 other people across The Bahamas. Hundreds more went missing. Tens of thousands lost homes, businesses, or jobs. The storm caused almost US$4 billion in damage — or about a quarter of The Bahamas’ GDP.

The impact of Dorian and other storms likely contributed to the tougher stance Caribbean leaders are now adopting.

“Regrettably, there has been too little attention paid to planet, to people, and to poverty by those countries who have been motivated by profit,” said Barbadian prime minister Mia Mottley at the meeting’s closing press briefing. “It’s time for the world to stand up and say enough is enough.”

Barbados has been trying to cope with persistent drought, a longstanding problem made worse by climate breakdown. In 2019, the island experienced its most severe drought in decades. Drought reduces farm yields and occasionally taps run dry in parts of the island.

Dominican president Roosevelt Skerrit said he had wondered if Caricom should boycott the COP meetings to show their dissatisfaction with how little the gatherings benefited the region. Eventually he concluded, “We have to go and let our voices be heard. Because our forebears who fought for independence and emancipation — had they given up, where would we be today? We have a duty and an obligation to fight for the survival of future generations.”

In 2017, the category five Hurricane Maria flattened much of Dominica. The losses amounted to more than 225% of the country’s GDP. Skerrit has since vowed to make the island “hurricane-proof” by 2030.

“I think the issue of climate change has gone beyond that of a moral issue,” said Mitchell. “It’s a justiciable issue. I think that as islands that have borne the brunt of the proven loss and damage arising from the greenhouse gases, we are entitled to compensation.”

He spoke of plans to build a wall to protect the Carenage, a 300-year-old waterfront area on the outskirts of St George’s that is popular with tourists, and being encroached on as sea levels rise. Eventually he hopes to make the capital a “climate smart” city. All of this, of course, requires immense amounts of money.

Caricom’s focus at COP27 and beyond is getting industrialised countries to live up to their Paris Agreement commitment to give US$100 billion a year to countries affected by the climate crisis — but who had little to do with causing it.

One idea discussed at the meeting was a loss and damage fund maintained using 1% or more of the revenues derived from the sale of fossil fuels, the burning of which is one of the main sources of greenhouse gas emissions.

To make accessing loans and other funding easier, Davis is asking for a change in how national income is measured. The Bahamas’s GDP per capita has been deemed too high to qualify for certain aid facilities. Davis is asking that a vulnerability index be used instead of GDP per capita in determining a country’s need for financial assistance.

Bahamian climate scientist Adelle Thomas said Caricom countries have been pushing for these things for a long time, but have been especially focused after COP26.

“Since COP26, Caribbean countries have really been proactive in coming up with what they want from the international community as it relates to climate change,” she said.

Thomas has been part of the movement to make the climate change-induced loss and damage sustained by vulnerable countries a bigger part of the conversation.

“Since the development of the UNFCCC (United Nations Framework Convention on Climate Change) back in 1992, the primary focus has been on mitigation. What can we do to reduce greenhouse gas emissions?” Thomas says.

“As small island countries, we in the Caribbean emit less than 1% of those global emissions,” she continued. “What we really need to be focussing on is how we deal with the impacts of climate change. And that’s adaptation. If we experience those impacts, how do we recover from them — and that’s loss and damage.”

Thomas works with the Alliance of Small Island States (AOSIS) and the Santiago Network, which was established in 2019 by the UNFCCC — the body behind the COP meetings and assessment reports — to give countries technical support about loss and damage. She was a lead author in the IPCC report.

She said Caricom has a number of obstacles to getting its demands met.

“We do OK at saying this hurricane caused this much damage. What we need to do more of is assessing the other effects, particularly slow onset,” she said.

“We know that sea levels are rising but we’re not really tracking where we’re experiencing coastal erosion, where are we seeing loss of land,’’ she continued. “One of the challenges that we then face at the international level is that without that assessment of all of the impacts of climate change that we are experiencing now, it’s difficult to say we need this much money to deal with it,” she said.

At the COP meetings, the delegations from Caricom countries are small compared to those of the bigger countries — two or three people compared to hundreds.

At graduate school, Thomas intended to specialise in sustainable tourism but was persuaded to choose climate change.

“My dissertation advisor said you need to pay attention to climate change. Because of climate change you may not have any islands left to even think about tourism,” she said.

Like most people in The Bahamas, she has personal experience with the effects of hurricanes. “My earliest recollection is Hurricane Andrew in 1992, having to seek shelter in our bathroom. Because that was the one room that had concrete all around it,” she said.

Her grandparents’ home was completely destroyed by Dorian. Friends and other family members also lost their homes. “So it’s a very personal connection with climate change impacts and with loss and damage. When you are experiencing it yourself you have that much more of a commitment to make sure that this is dealt with,” she said.

She said there’s reason for optimism about the Caribbean’s prospects in dealing with climate change. “When I came back to The Bahamas in 2012 after finishing my studies, people were still arguing with me as to whether or not climate change was real. I was just flabbergasted by that. Then 10 years later, people are like, ‘This is real. This is a huge threat for us. And we need to do something about it.’

“There has been progress. Even though it’s been slow,” she said. “We can’t give up. It’s not an option to give up.”

Her words echoed a comment made by Prime Minister Mitchell at the press briefing in August. He and the other leaders at the meeting saw it as a positive sign that Grenadian Simon Stiell was appointed executive secretary of the UNFCCC the day before the meeting started.

“You can’t get weary. And you can’t give up,” he said. “It’s an existential threat. We are fighting for our survival.”